GREAT NAVAL DEEDS OF THE WAR

This series of cards by Abrahams & Son, Devonport, in about 1916. There were two series but the cards are not numbered and I don't know how many there are in total. These cards do not scan well and ane probasbly best viewed in Large format. These pictures are published for pleasure/information/research purposes only and are not for sale or copy under any circumstances. Information in captions has been researched as thoroughly as possible but it accuracy cannot be guaranteed.
Read More 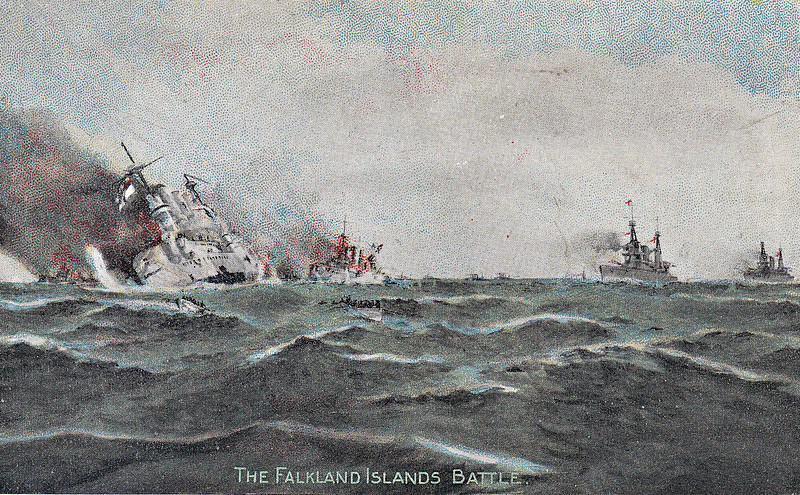 FALKLAND ISLANDS BATTLE - 'A British Squadron arrived at Port Stanley, Falkland Islands, on December 7th, 1914. On the morning following a German Squadron hove in sight, with the evident intention of taking the Falklands by surprise. Finding apparently only a British squadron of five cruisers, none of them equal to the German armoured cruisers in fighting value, the Germans promptly closed in and opened fire, the British cruisers replying. The action had become furious and evenly contested when out through the narrow entrance of the harbour came INVINCIBLE (Flagship of Vice Admiral Sir DF Sturdee) and INFLEXIBLE, both with their eight 12-inch guns swung out for action. Admiral Von Spee at once saw the terrible mistake he had made. His squadron were soon in a hopeless condition. SCHARNHORST (Flagship) sank first, followed by GNIESENAU, LEIPZIG and NUERNBURG.' Von Spee was in a hopeless situation. He was not looking for trouble but for supplies: he was trying to get home to Germany, with not a single friendly hand between him and home, and he had been told that Port Stanley, a important British supply base, was only lightly defended. The British battlecruisers, which had arrived at Port Stanley only one day ahead of him, not only completely outgunned and outranged him, they were also faster, so he couldn't even run away. Nevertheless, all of his ships went down fighting with battle ensigns flying, no quarter asked or given, in revenge for the British defeat at Von Spee's hands at Coronel. Only DRESDEN escaped, to be sunk later. British casualties numbered only 10 dead, whilst 1871 German sailors died.